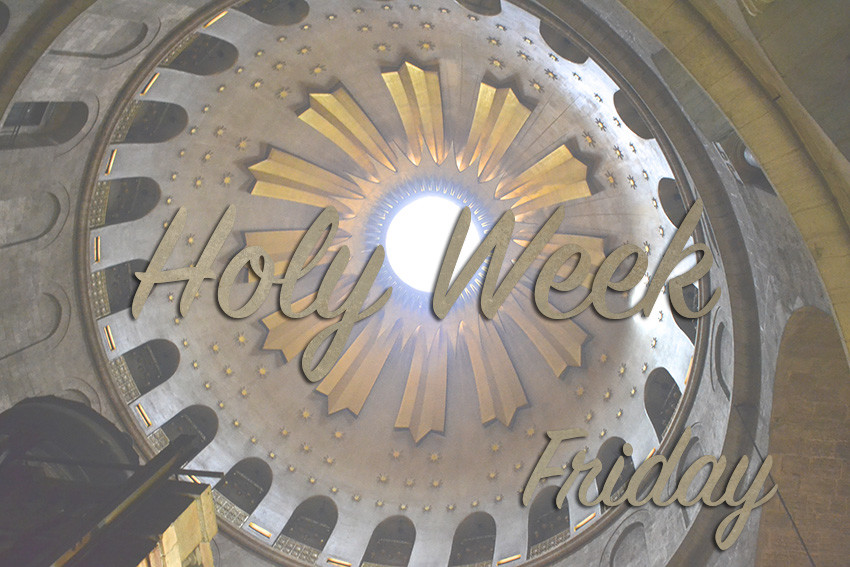 The “pit” in Caiphas’ House where Jesus was kept during questioning.

One of the most profound moments on my trip to Israel was standing inside the pit where Jesus stood after arrested. These little details aren’t in Scripture. You have to stand in the actual place to know that He would have been hauled underground in Caiphas’ house and chained in a holding cell until ready to be questioned.

Then, because of the High Priest readying Himself to go to the temple, Caiaphas couldn’t risk being around a murderer with blood on His hands. that would make Him unclean.

So, there Jesus stood, in the cold dark room that had no light except from the small opening door floors up (in the picture you will see there are windows cut out.  Those are new and didn’t exist then). He had just been betrayed by one closest to Him and another was in the courtyard upstairs denying Him. he knew what lie ahead of Him and He was utterly alone, faced with the reality that soon His Father would, too, have to turn His face away as not to look upon the sin He would take upon Himself.

We focus so much on the cross on Friday and it was a brutal, inhumane was for anyone to die, especially the sinless Son of God.  But standing there in that pit what struck me was how utterly abandoned Jesus must have felt and how we cannot even begin to comprehend what being separated from the Father on the cross meant to Him.  He was completely one with the Father from the beginning of time in a way we cannot understand until eternity.  And He knew that darkness was coming and separation.   The striking thing is, because He was abandoned and separated from the Father, we never have to be….

That Day on the Cross

as they stripped Him of His clothes.

There was no turning back.

This was the path He chose.

They mocked Him and they beat Him.

They spat upon His face.

Yet still He gave them

They pressed the thorns into His head

and His blood began to flow.

Yet the love He felt for them

The spikes in His hands and feet

held Him on that cursed tree.

This was the plan all along,

the way it had to be.

He endured this suffering

As no innocent man should.

Yet He bore all of our sins at once

as only God Himself could.

As He died, He took all my shame

And suffered in my place.

With His death He gave me

The right to look upon His face.

With the last breath He took

He endured the ultimate loss

so I wouldn’t have to

that day on the cross.

Apr 2, 2015Nicole
Listening to God:Good Friday, Holy Week, That Day on the Cross91

You Turn Our Grieving Into Joy {Maundy Thursday}
You Died For Us {Holy Week: Saturday}