The Work of Living in Community 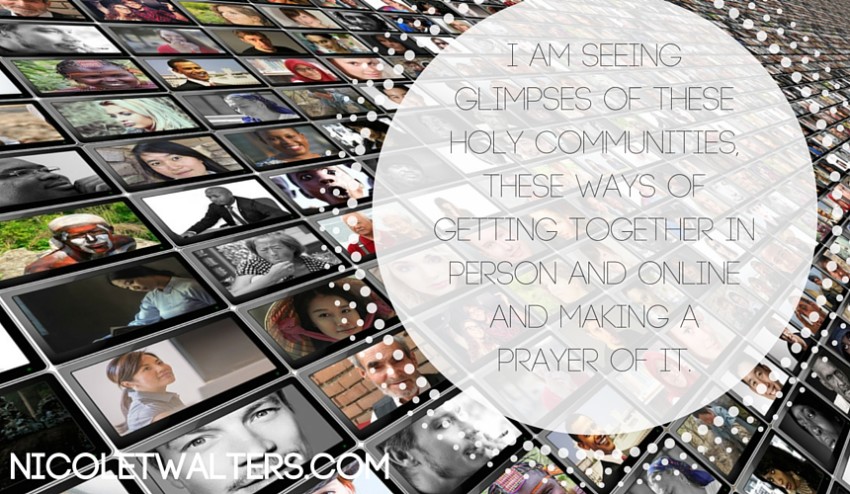 Community can be an elusive goal, a moving target. Really living in community with others doesn’t come as naturally as proximity and it certainly comes with loss, heartache, and a lot of work.

For years, I thought of community as something that was built into the church. I mean, we are called the Body of Christ. We are all supposed to be part of the same living, breathing organism. That comes naturally, right?

I glimpsed real moments of community in a small group that lived our lives all tangles up with each other. All these young married couples were clueless as we navigated births and deaths, faith and lack thereof. Life was a mess of baby showers (one every other month the year we added about seven babies into the midst), birthdays, and snatches of prayer caught in the moments the little ones were playing.

Then the anchor of our little group moved away and we fell into disarray, tumbling out of community and groping in the dark for something that looked like what we had known before.

I knew there was a hunger in me for someone to really see me, a loneliness I couldn’t put my finger on. I didn’t realize how deeply it ran or how universal this longing really is until last week.

When I stepped into the home of a friend I’d only known online for the past year, a relationship grew deeper but I also realized that the foundation was already there. We met through a collaborative blog she founded and we have chatted over email and facebook, texts and through the words of our lives we put out there online for all to read.

I fell right into her life – picking up her daughter from school, meeting those she lives life with, and sharing our hearts over dinner. Hearing her words straight from her, instead of on a screen, and hugging her neck made the friendship so much sweeter. But I realized that community already existed there. She already knew me.

I expected an awkwardness in online relationships becoming real at the Festival of Faith and Writing when I met dozens of people that have only been bio pictures on a screen to me before. I found community instead, people longing to know and be known just like I was.

Maybe it is something about writers – how we can’t do small talk because we lay our lives bare in our words for all to read anyway. But we moved right into spiritual conversations and sharing our struggles, our hopes, and fears. There were tears and laughter over late nights because we just didn’t want it to end.

In several panels I heard writers talk about their blogs as their homes – places they build community. Leslie Leyland Fields talked about her blog being a place where she can invite people into her home, saying because of it she lives “in a bigger house with open windows.”

I realized these places I visit online are people’s homes, that social media (flawed as it is with false selves and picking fights) has built a global Body of Christ that I couldn’t truly see until it became flesh for me.

Back at home this week, I dove back into writing for my home – my own little corner of the internet. Comments came in and I realized I have a little community right here. Voices of my friends waited for me on Voxer and their words flowed in text messages, across facebook and twitter, emails and on blogs.

I also sat across several tables this week with members of my little group, scattered and gathered back together in different ways. We don’t look the same as we used to but our lives are still tangled up together.

I made space by getting up at 5 am, a long breakfast with an old friend before work. We shamelessly prayed in the middle of all the people bustling around us, grabbing their breakfast before heading off into their day.

I looked at her and said, “This is the church. Right here, we are it right here and now.”

Matthew 18.20 says “when two of you get together on anything at all on earth and make a prayer of it, my Father in heaven goes into action. And when two or three of you are together because of me, you can be sure that I’ll be there.”

He was there in that morning. He was there at the Festival of Faith and Writing. He is there online and in all our messages sent out in hopes that a community is being built in all of these spaces of our lives.

I ran from breakfast to work to a lunch to meet with a new writer friend. I sent messages from the school carline, prayed with a friend after a text came through while I was driving to the gym. I fell asleep in front of the television that afternoon, my four-year old curled up in my lap.

I was exhausted but was also being made new. I am seeing glimpses of these holy communities, these ways of getting together in person and online and making a prayer of it.

Where are you building community these days? How are you making a prayer of your getting together with others?

When I Knew I Was Beloved
Let's Be All There