Following God One Step at a Time. Guest Post by Lindsey Hepler. 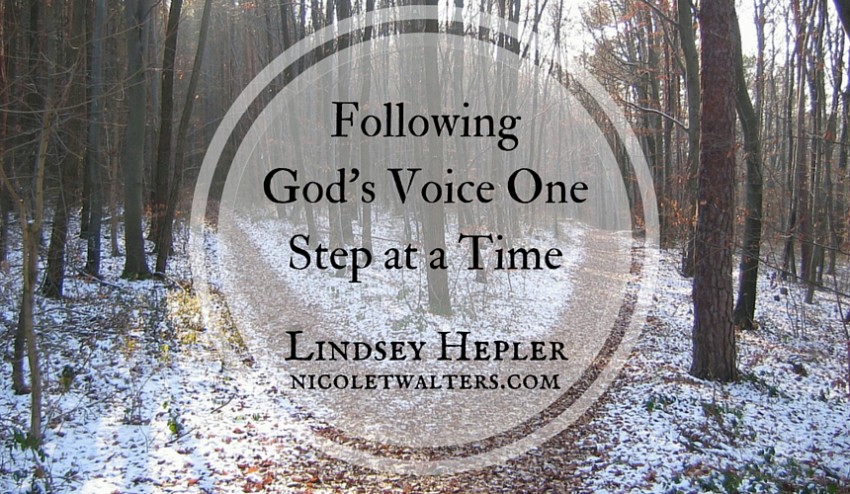 On Wednesdays guest writers are raising their voices. I am thrilled to share these beautiful words with you from Lindsey Hepler on how she heard, and is hearing, God’s voice. I hope they challange you to follow, without question, when you hear God speak. – Nicole

“Today, if you hear his voice, do not harden your hearts.”

A funny thing happened about one year ago.

It is still hard to find the right words to describe the events that unfolded over the days and weeks at the end of January and beginning of February 2015. The simplest and clearest way to describe it is simply to say this:

God spoke to me. I heard His voice.

The first message came, after a period of intense frustration, as a feeling of overwhelming love and security, a deep-rooted sense that everything was and is and would be okay.

Then, a clear statement; a provocation; an invitation.

Next, a serendipitous meeting, followed by advice offered over coffee and heeded, without question. A prayer spoken, asking Jesus to light my path, one step at a time.

Along the way, I moved according to that same deep-rooted feelings of rightness; and my path was revealed, one step at a time.

One year later, I am only a few small steps away from that initial experience. I have made changes in my day-to-day life by setting aside time for daily prayer and reflection through The Examen; sought out opportunities for deeper spiritual reflection; begun practicing Centering Prayer; and invested myself more deeply in my church community through participation in the Fellows program. While there are hints of future directions, next steps, no clear path has yet emerged. I now recognize myself as both an educator and a minister, though I do not know how these vocations will play out in my life, specifically. For now, I am trying to stand still and to listen, yearning to hear more, struggling to rest in this seemingly in-between place.

What continues to amaze me is the way in which, upon hearing God’s voice, there was no moment of choosing whether or not to listen. I was softened, my heart opened. I felt curious about what I heard, and the only option was to follow the line of questions laid out before me, one after another, after another. I am still asking questions.

It strikes me as a risky and courageous choice, to listen and follow the rather obscure message I received. This coming from me, a woman who could seldom be described as a risk-taker, someone for whom “playing it safe” has more often than not been my preferred path. Yet what rings true for me is the knowledge that any courage I have displayed was itself God’s voice pouring through me — a pure gift of grace.

There are decisions to be made in 2016, decisions that could radically change the shape of my life. As I complete my Fellows year and my husband completes his graduate degree, our next step is unclear, our options seemingly endless. Will we stay in Charlottesville? If we move, where will we go, and why? Whose career will take priority? How do we balance both of our ambitions, when they can at times seem to conflict? Will I pursue ordained ministry? And, as we approach our 5th wedding anniversary and our 30th birthdays, will we decide that now is the right time to start a family? If not now, when? These questions, of course, are scary to me (see “playing it safe,” above). Steven Pressfield’s words have helped: “When we commit to an enterprise in the face of our fears, something wonderful happens.”

I hold fast to the knowledge that God has spoken to me, in so many ways before, and I live in the hope that He will, and indeed is, continuing to speak to me even now. I continue to pray that my discernment will be clearly guided, my path revealed one step at a time.

I pray for the courage to rest in His constant love.

I pray for His grace to soften my heart, to open my ears;

and I listen for His voice. 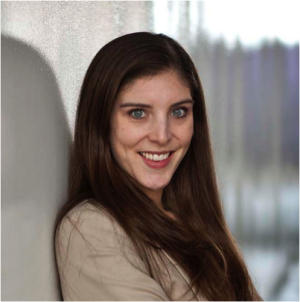 Raised in Dallas/Fort Worth, the middle daughter of two east-coast-raised parents, I moved east for college, where I studied Arts Administration and Dance. I went on to receive a master’s degree from NYU’s Gallatin School for Individualized Study with a focus on Transforming Education through Arts-Based Learning. After 2 years in New York, my husband and I returned to Charlottesville, VA, where I work at the University of Virginia. This year, I am participating in the Fellows Program at Christ Episcopal Church. I practice (and teach) Ashtanga yoga, and try to find time each week for reading, writing, and coffee dates with friends.