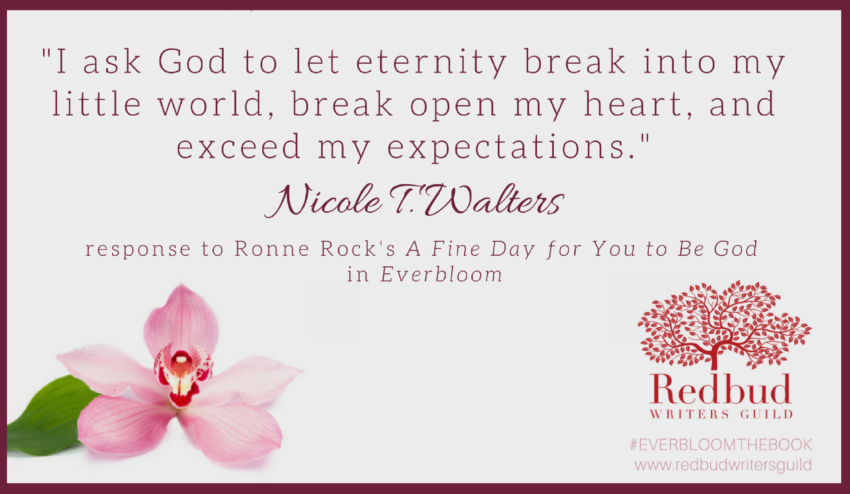 I am honored to have my voice included in the release of Everbloom {Available TODAY from Paraclete Press}. Together we are journeying through the book’s sections: Roots, Trunk, Branches, Blossoms. The beautiful thing about this book is that it is not meant to just be read. Become part of the story. Journey with me. Read along as I share a piece from each section, respond, and ask you to respond with me….

Nothing turned out like I expected it would but everything turned out exactly as it should have. I went into our first international move with dreams and plans, a heart full of hopes for a life planted deep into the ancient soil of that bustling city. I thought we would stay there for years but we left after six months. I dreamed of speaking fluent Arabic and six years later when my Palestinian bus driver learned I had lived in the Middle East and started trying to converse with me I just shrugged and said “shawaya arabi,” meaning “I speak only a little Arabic.”

Now in the throws of our second international move, two children in tow this time, I keep reminding them and myself to hold onto our dreams loosely. We write our prayers and wants on a big piece of paper taped to the living room wall because we know God cares about our hopes and dreams. He wants to hear what is in our hearts and it is a beautiful practice to lay them out honestly and see how He answers our prayers. It’s also a beautiful practice in surrender when we see how He answers them by saying “no” or in a way that is not what we expected. I want to expect the unexpected this time, to see God show me how His plans are better than what I could ask for in my limited view.

I pray with open hands these days, surrendering all I want to God, asking Him to give me His will instead. Palms up. Trying to let go. Asking Him to make me ready to receive. When my daughter asks why I tell her a story about our move ten years ago.

I had pictures in my head of what our flat would look like when we moved to Egypt. I had heard not to expect to find a place quickly, to be open to looking at lots of flats. I didn’t have high hopes but had two things that were non-negotiable. I wanted an elevator and a balcony. The elevator was for the days when the temperatures reached 120 degrFahrenheitheit and climbing flights of stairs seemed an impossible task. The balcony I dreamed of was a window into the beautiful city and it’s people. I had these images in my mind of hanging the clothes to dry amidst children playing next door, of sitting out on the balcony, the noise of the city rising all around me while I wrote and studied.

The first place we looked at had both of those things but something just didn’t feel right. I stood on that big balcony and just didn’t believe this was the one. We kept it in mind but looked at other flats. We braced ourselves for weeks of searching. The next day we climbed four flights inside the sweltering concrete stairwell. No elevator. The heavy wooden door opened into the cool flat, the air conditioner straining against the heat. The landlady introduced herself as Samiha and accompanied us around the little flat, proudly showing us how it had everything we would need. It was fully furnished and she promised a second air conditioner in the bedroom, a new washing machine in the kitchen. Internet could easily be installed (though as we soon learned easily means something a little different in Egyptian terms). The close line was stretched outside the kitchen window where you had to precariously hang out to reach the clothes. The wide bedroom windows looked out over a busy street but there was no balcony.

It didn’t have the things I had hoped for but we just knew this was the one. The next few hours were a blur or finding an ATM to get the deposit and signing a lease in a language we didn’t yet understand. A friend’s realtor negotiated for us and Samiha smiled widely as she handed us the keys. We had a new home in just a few days and after the whirlwind was over and we trudged up those stairs we wondered if we’d done the right thing.

It wasn’t until months later we could look back and see how that flat was handpicked for us, how it was exactly where we were supposed to be. Samiha became a dear friend, which our local friends said was quite odd. “You don’t get to know your landlady, that’s a business relationship,” they said. But she became family to us in a foreign land. Countless hours were spent at her little basement apartment nearby, practicing our Arabic poorly and watching Egyptian soap operas as she told us stories about her acting days. We broke the fast during Ramadan at that dining room table, learned to cook bechemel sauce in that kitchen. We were close enough to her to talk about faith and pray for each other, to ask the deep questions and bare our souls.

And as we climbed that hot stairwell back home, dodging the stray cats and bags of trash left to be picked up by the doorman, we met the neighbors that invited us into their homes, too. Some days we smiled and kept going but most often if their doors were open, we were going to be stopping in for tea, at least. We would finally make it home after hours spent in conversation with new friends, our minds tired from trying to navigate two languages. The click of the air conditioner was a welcome sound as we collapsed onto the couches and finally rested.

I didn’t get the flat I hoped for; my dreams of a balcony to overlook the city weren’t fulfilled. We got something so much more important. We had asked God to let us find a home, not just a flat. We wanted to become a real part of the community, to find a family there. As we walked up the stairs, we got to know the people. As we spent time with Samiha, we were known. God didn’t want me sitting there on a balcony looking out over the beautiful city. He wanted me out there living in it. And that’s what I really wanted all along, too.

I still wear the brightly colored bangles Samiha gave me as a gift when she found out we were returning to America. They are a reminder of my friend but also of the way God’s will is so much better than our own plans, how eternity broke into our world in the community we built in Egypt that will remain a part of us all our lives.

So, I keep my hands open these days. I ask God to help me see past this fleeting, temporary world and all the things I think I have figured out. I ask Him to let eternity break into my little world, break open my heart, and exceed my expectations.

{Now share your story} How could you commune with and serve the desperate in your community? Describe where you have seen Eternity break into your world. 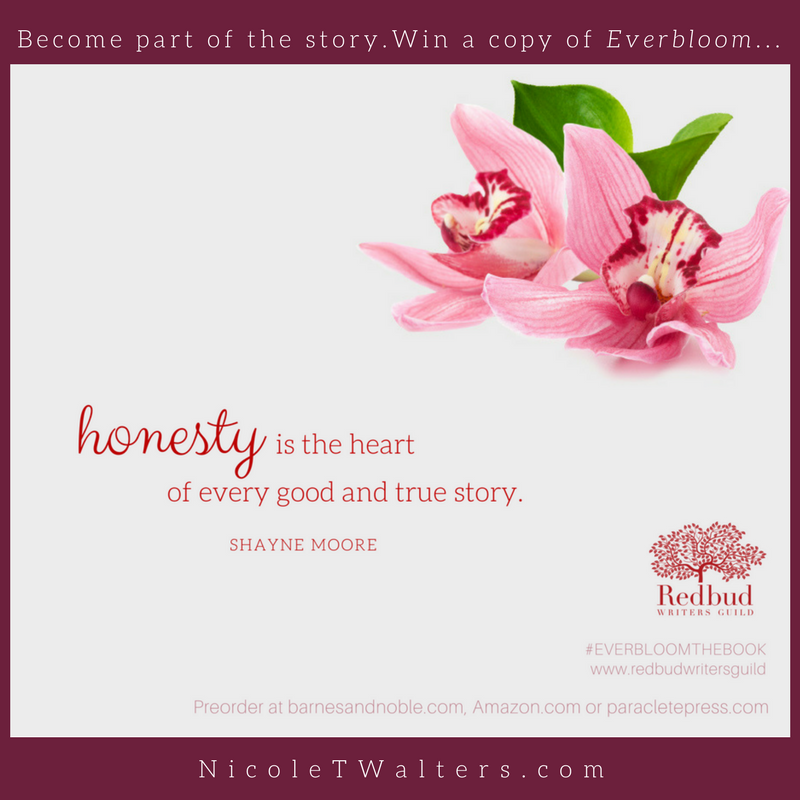 Join me for the rest of the Deeply Rooted and Transformed Series and enter to win your own copy of Everbloom! Enter until May 8th.

He Is Enough
My Story of Transformation