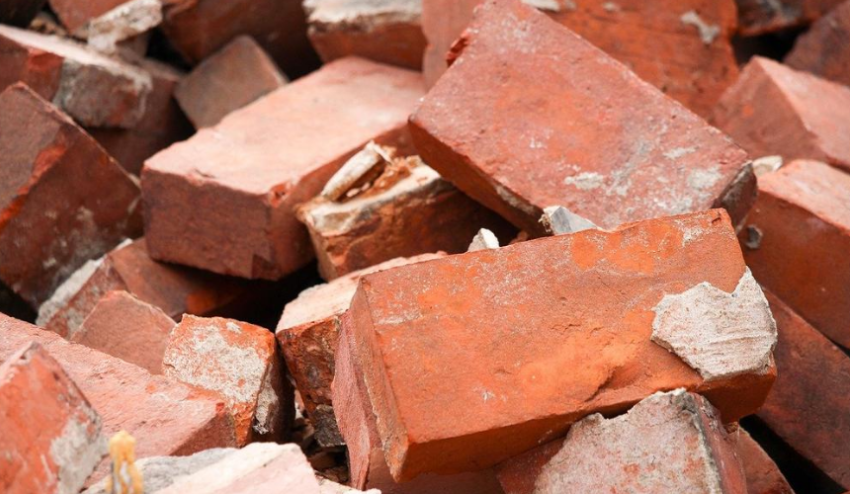 Suddenly, the sunlight was blotted out by the angry smoke that curled toward the sky. A row of cylindrical chimneys signaled our entrance into the brick factory district on the outskirts of Dhaka. The air hung heavy with the texture of coal emanating in dark clouds from the kilns. As our family rode by we watched workers stack bricks six high on their heads to carry them to trucks. Their back-breaking work of making bricks sent an endless supply of construction material back into the city.

But the work of building didn’t end there. In the year and a half we lived in the capital of Bangladesh, we watched the skyline around our flat constantly shifting. Our building would shake in the middle of the night as truckloads of bricks were emptied into the street. The next morning we would emerge to wave at the construction workers as they sat on a growing pile of rubble. They were already hard at work shattering those very same bricks.

With only one source of stone in the country, bricks were used for construction but also broken down to make the ingredients for concrete. We daily watched clouds of red dust darken the site as women and children shattered the bricks by hand and carried them into mixers to build the foundations of new apartment buildings.

We always said, “What a waste of hard work to make those bricks! I can’t believe they’re just breaking them now!” But it was the only resource they had. And so, they continued to build with what they’d been given. They built up and tore down and built up again. Day by day we watched the city slowly inch higher on the backs of these workers.

When God gave me “build” as my word of the year for 2020, I anticipated starting out with finished raw materials and seeing progress rise all around me. I mean, I was ready. I’d spent long enough tearing down and living in limbo. I’d down deep soul work and was ready to see changes in my life. I promised to let go of plans and to and accept whatever came next, laying brick upon brick as God unfolded the next season.

I started the year with hesitant excitement, still adjusting to being back in the U.S. I’d started a new job in digital communications. My husband, Lee, was still looking for work. We had moved into a home we thought would be a temporary arrangement but then decided to stay, planning renovations and additions. Possibilities to create a future nearly from scratch seemed promising.

I had long been yearning for a more contemplative approach to community worship, a place my wandering heart might belong. I’d attended church in eight (some wildly) different denominations/traditions throughout all my moves. I’d visited so many others around the world and gone on retreats annually to a Trappist monastery for years. Amidst so much shifting faith practice—I didn’t feel like the church “home” I was coming back to in the U.S. was home anymore. I fought it for my family, but I knew I couldn’t stay.

In January our church visiting as a family had stalled and we decided to pursue two different avenues. Lee and the kids would attend what had been our home church before we moved to Bangladesh, and I would attend an Episcopal church we had visited during Advent. I felt like I had found a place, at last, I could belong.

The kids were starting to feel settled in their new schools and we had a solid routine down where I worked while they were at school and wrote on weekend mornings at a coffee shop in the early hours while they slept. Lee started his new job and I was talking with an editor about a book idea that was consuming my thoughts. I could just see this new future rising toward the sky.
And then…

It’s 2020, so you know what the “and then” of this scenario entails. The world stood still and then the world seemed to go up in flames. All our well-laid plans crumbled around us.

Some of what I believed were the bricks we would use to build up our lives, turned out to be rubble. I think as we enter the fifth month of the pandemic, of civil unrest and reckoning in our nation, and so much uncertainty—many of us realize how fragile our dreams, our plans, our priorities really were. We’ve watched them shatter as we learn to just survive.

We were plunged right back into the world of transition and uncertainty we believed we had just left as a returning expat family. The last few months have felt so full and so empty, so long and a blur I can barely remember. Some dreams have evaporated. Some have shifted. Some are being reimagined.

Over halfway through 2020, I feel no closer to understanding what God is building then I did in January— in my own soul, in my family, in our nation, or in the world. None of us seem to know what comes next. And that has been devastating. And that has been enlightening.

My writing plans for the year have certainly evaporated. That book idea fizzled, while others lie in wait. I couldn’t write for weeks, could barely enter the online world in which I write. It all felt like too much on top of figuring out how to survive in this new reality and the mounting anxieties that required me to reach out for medicine and to put some strict social media boundaries up for a while.

I realized so much more needed to be torn down in my life and in my soul. God is never done with us. We’ve never arrived. I thought I’d had my fill of living in the incomplete and I’d find a place to settle at last. God said, “Keep journeying with me. We have a long way to go.”

I want the building to be easy. I said I didn’t need to know all the plans, but I really wanted to at least know I was headed toward progress. God said, “You are. It just doesn’t look anything like you imagined. Wait on me. Just wait.”

So, I sit and sift through this pile of rubble. I try to build with what I’ve been given. Some bricks can be salvaged for building. Some will turn back to dust. It’s not mine to know what will come or even how we’ll get there. For now, I just try to learn to trust the Builder.

How has the reality of 2020 changed your spiritual growth? Where is God in the chaos of this year for year? What dreams have turned to rubble for you and how are you learning to trust the Builder?

Do you have a word that is guiding your year? How has your idea of the word shifted mid-year? How do you feel about what is coming in the next five months?

I’d love to hear from you and be praying for as we continue this journey of 2020! Leave a comment below.

Creating Space is my monthly letter to you, the one who wants to find the places where faith and action intersect, where listening to God and learning from others lead to lives of love. Sign up here.