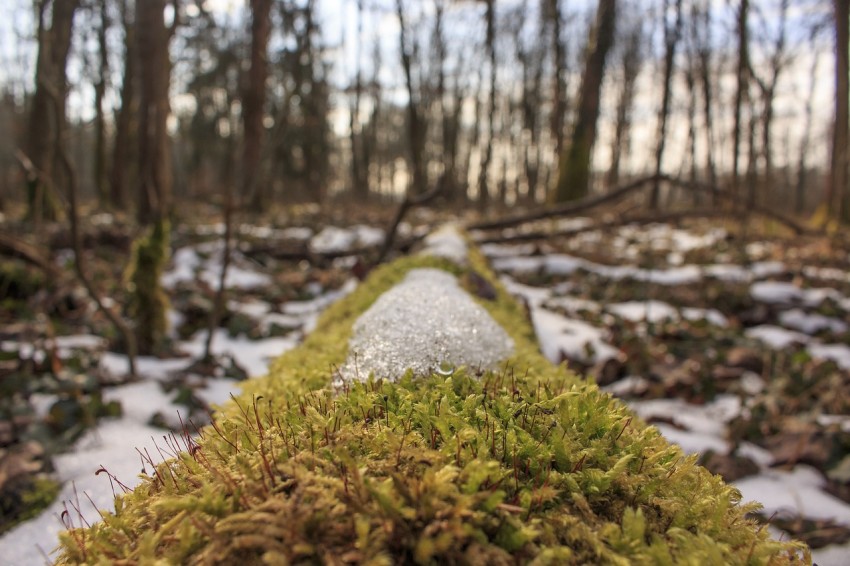 It’s the death part, which has to come first, that doesn’t come so easily. I tend to hold onto dreams or seasons of my life, not willing to let die that which God requires me to let go of to bring new life. END_OF_DOCUMENT_TOKEN_TO_BE_REPLACED

How Our Weeds Become Offerings of Love. For the Mudroom. 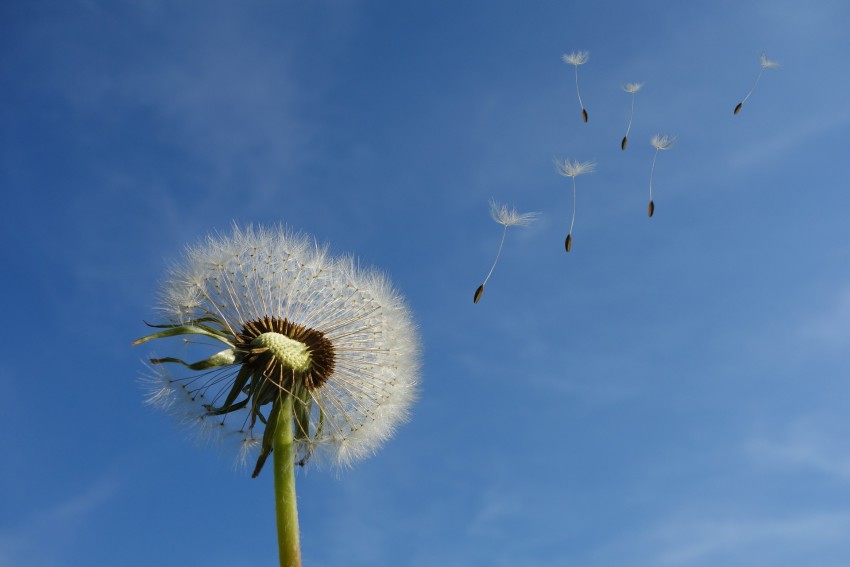 His chocolate-brown eyes glitter with such an innocent joy that I can’t help but scoop him up in my arms. At four, my son still has a touch of baby in him that allows him to come running to me when hurt and lets me lie next to him until he falls asleep. But he’s a little boy in most ways and, as with most little boys, the first signs of spring are like rain after a drought to him.

After we had the mildest of winters the lizards and roly polies are out early this year. We spend most of the day after school outside as he scours the backyard for his favorite critters.

Daily he comes to me with offerings of love found beneath the trees that tower overhead. I hear his sweet voice cry out “for you, Mommy.” He presents me with a tiny yellow flower.

It’s not really even a flower, as my husband is quick to point out. It is a weed.

I can hear him groan every time one of the kids bends down to blow the dandelion seeds into the wind. The child in me loves to see the cottony white seeds take flight on the breeze, spinning like little ballerinas, tutus twirling in the sun.

My husband sees the resulting stubborn yellow flowers sprouting up in the yard, making more yard-work for him.

But my son sees something precious – a gift for his mommy.

I see a priceless offering from a son who wants to pour out love in the only way he knows how...

This week I am sharing about what my son is teaching me about offering, love, and joy at the Mudroom. Join me there?

The Light That Led Me Home. For SheLoves Magazine. 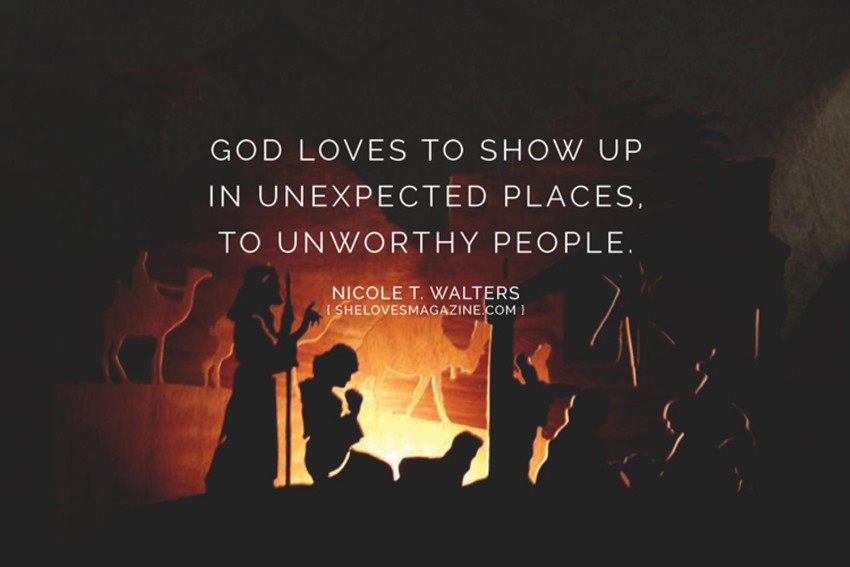 I remember the warm glow of that tiny bulb shining down on the mossy cradle that held baby Jesus. My favorite part of Christmas growing up was being the one to rush in each evening and plug the manger in, watching the peaceful scene light up with the warmth that little light brought.

I would sit at the manger in the glow of the Christmas tree and just stare at the picture I knew little about. I didn’t really hear the story behind the manger, growing up in a home that focused more on presents than on the Jesus of Christmas. But still there was just something about sitting at His feet that moved me.

I was hungry for a taste of Jesus, not knowing where to start. I asked my mom for a Bible for my eighth Christmas. I remember the sound of the spine cracking the first time I opened that King James Version Bible with the white lacy cover my mom hand-made for me. I poured over the stories I didn’t understand.

My mom may not have taught me much about the Christmas story growing up. Still there was something in her that guided me towards what it meant to seek after the holy moments, that honored my seeking...

Today I am over at SheLoves Magazine finishing up my December focus on Advent with a recollection of how Jesus came for me in my childhood and Him coming for me again and again. Join me there...

Waiting for the Promise 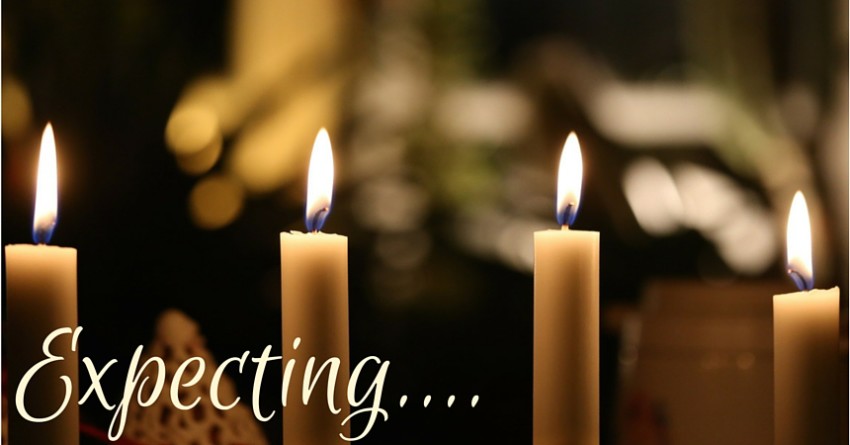 On that day the announcement to Jerusalem will be,
“Cheer up, Zion! Don’t be afraid!
For the Lord your God is living among you.
He is a mighty savior.
He will take delight in you with gladness.
With his love, he will calm all your fears.
He will rejoice over you with joyful songs."

The waiting for my first child seemed to stretch on forever as it was a week past my due date before labor pains began. After laboring all day, I sat in the hospital expecting to be told she would come soon only to be told I needed to wait and walk some more. Each step felt like it made the pain start anew and the end felt nowhere in sight. Even two hours into pushing, my little diva still took her precious time as we found out she was face up, having a hard time coming into the world.

Struggle and joy are never so intertwined as in those moments of labor, when you speak those words and mean them - "I can't do this anymore!" You truly feel like there is not another ounce of strength in you, even though you know the reward is near.

I cried those words and wanted to give up, even after nine months of waiting. Even after hours of labor and pushing. One more anguished push and I couldn't even understand what was happening when this squirming little body was placed on top of mine. I didn't even realize she had arrived until my mouth was gaping open, tears streaming down my face as I held her to my body. Outside my body. In my arms. How did this happen?

There would be time for celebrating, for announcements and laughter, for photos. Oh, so many photos.

But in those moments, there was nothing but me and her. All of my waiting and working had finally come to an end, even after I had stopped believing it was possible. There were only those dark eyes looking into mine, looking like mine. Nothing else mattered. My dream was living and breathing, in my arms.

I have always read the Old Testament prophecies about Christ from the perspective of one who knows they have been fulfilled, like the mother who already holds her newborn. I haven't really felt the waiting in the words, the pain and struggle the people of God must have felt as they waited for the One to come who would change their lives.
END_OF_DOCUMENT_TOKEN_TO_BE_REPLACED

Preparing for a Promise

'The day will come', says the Lord 'when I will do for Israel and Judah all the good things I have promised them. In those days and at that time I will raise up a righteous descendant from King David’s line. He will do what is just and right throughout the land. In that day Judah will be saved, and Jerusalem will live in safety. And this will be its name: ‘The Lord Is Our Righteousness.’ - Jeremiah 33.14-15

When I found myself expecting my first child, I was twenty-seven years old but nothing made me feel more unprepared and like a child myself than knowing what lie ahead. No one stops to learn how to be a mother, to care for another human being and all that entails, until they themselves are preparing to have a child. And nothing makes you feel as utterly inadequate as knowing the responsibility that you now carry.

The two blue lines barely had time to appear on that little white stick before I started reading books about pregnancy, birth, and caring for a baby. I suddenly knew how much preparation was needed. I didn't only need a crib and a car seat, diapers and a thousand other gadgets and tools to take care of a child. I also needed the knowledge that mothers before me, doctors, and friends had to offer.

That firstborn of mine now stands next to me, hanging the sparkling silver angel that was her first ornament on the seventh Christmas tree of her little life. All the rush and hurry of this season is upon us again. I look into her sweet blue eyes that still see the magic of all the lights and songs. I want to create with her traditions that speak also of the expectation that should come with this season before us.

Advent, the season beginning four Sundays before Christmas, means "to come" in Latin and its essence, to me, is reminiscent of that very expectation that I felt as a mother-to-be.

Shouldn't it be so? Mary found herself still a child, unprepared and unexpecting when she carried both a great weight and the very One who frees us from every burden. END_OF_DOCUMENT_TOKEN_TO_BE_REPLACED